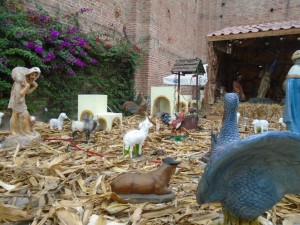 Starting in high school, I wrote a term paper titled Perspective in Art for an algebra class showing the formulas used to convey depth.   I was able to repeatedly modify and re-use the same paper throughout college for courses on art, math and communication.  Perhaps it was this constant exposure to how perspective is viewed that flummoxes me when viewing Mexican nativities.

During Colonial times the Spanish brought over the tradition of placing nativity figures that were full of symbols, and different sizes, to distinguish the importance of each.  For example, in SMA’s markets you’ll find the important figures to be larger especially those on a celestial plane (like angels) than others that are earth bound.  On the earth plane will be various animals and a diverse group of humans like Adam and Eve.  This cacophony of characters is used to tell the story of redemption in the birth and death of Jesus.  For example, there is always a hermit who represents a man of prayer and faith often tormented by the devil. 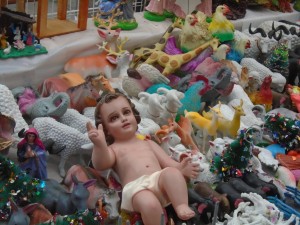 Naturally Jesus himself is often much bigger than other figures to indicate that he is the largest and most important. Even his manager is seen as only being 3 sided to indicate that God’s house, like open arms, is open to all.

Sometimes there are two Jesus’ at the manger reflecting the ancient belief that Jesus had a twin brother.  One child was divine, the other an ordinary human being representing heaven and Earth, God and man.  The twin’s name was Judas Didymus Thomas (Thomas means twin in Aramaic, as does Didymus in Greek.)  But why stop at only two Jesuses?

During Colonial times when nuns professed (joined the convent) it was the custom to give each gal a child, or several doll children of Jesus, as a way to replace the children they would not have.  The nuns cared for the dolls dressing them with very elegant dresses representing themselves as Jesus’ earth bound mother. 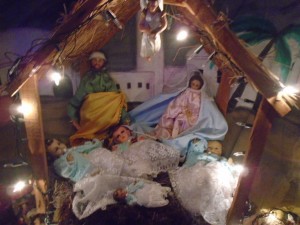 Theses dolls got passed down in families, or often individual family members prefer their own Jesus to take to church on Christmas Eve and Candelaria.  Either way, it is not uncommon to come upon a household nativity with multiple Jesus’ of varying sizes.

Also Jesus is often portrayed with darker skin as he was born for all, regardless of their skin color.

Following midnight mass on Christmas Eve the baby Jesus is kissed, cuddled and cooed by all members of the family to help the baby following birth.  Then dinner is enjoyed!

Multiple Jesuses combined with varying sizes of animals, angels, buildings, shepherds and kings confuse many foreigners but each has story and job to do.  Take St. Joseph, for example, who is often shown as being asleep as after the birth of Jesus he dreamt the need to take Jesus into Egypt to escape Kind Herod’s murderous rampage.

The point of a nativity to tell a story and if one has to fudge dimensions a bit to do so….so be it!