Lighting up the Season

When I was a kid it drove me to distraction my father refused to allow me to incorporate outside lights into the Xmas decorations.  His thinking was he took the bump in electricity bill for said lights and mailed the money to a Native American reservation.  (This was before the time of casinos and my father’s donation may have actually came in handy to the indigenous.)

As my parents, and I, got older and I took over some of their financial responsibilities I was shocked to approach their home one holiday season and see outside Xmas lights.  I teased them about noticing they were more free and easy with the holiday décor now that someone else was paying the light bill.  My mother was aghast and insisting “We pay for own electricity!  Tell him, John!” to which my father got that far off look in his eyes and sheepishly admitted “You know, Phyllis, I can’t remember the last time I saw an electricity bill.” 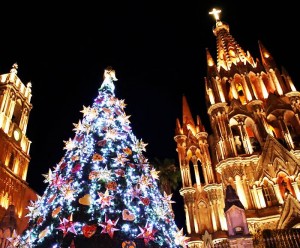 I remember this moment each time a newly elected SMA mayor gets to select his or her version of the public holiday lighting around town.  Personally, I kind of liked the implied cold from the hanging blue icicles a few years back.  Plus when the mayor goes with the traditional white, red and green lights I tend to get momentarily confused if it is Xmas or Independence time of year.

The most recent Mayor opted to feature locally produced decorations of native flora and fauna.  It was a nice gesture and a different spin on public décor in today’s holiday season.

Years past, In addition to outside lights, my children enjoyed a great array of Xmas traditions from traveling nativity pieces for the 12 days leading up to Xmas to the Xmas Eve sooty kiss from Santa on them and their favorite stuffed toy.  Plus the ever present Happy Birthday Jesus cake. 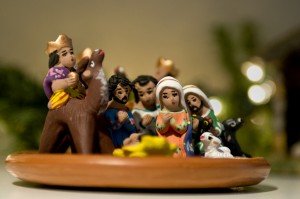 Now, with the tiny Toones grown and gone, I don’t feel much compelled to decorate inside or out.  But I do enjoy hosting SMA’s yearly International Creche Festival at various venues in town.  One of my favorites is the Mayan nativity where the indigenous dressed Wise Men bring the gifts of corn, tortillas and fruit.  When you think about it, what new parents wouldn’t enjoy some prepared meals more than frankincense and myrrh?  Like being born in the barn wasn’t smelly enough especially with no blinking lights to lighten the mood!