Who knew pregnancy was such a confusing issue?  Well, probably the folks that came up with the slogan “Mommy’s baby, Daddy’s maybe.”  Even an immaculate pregnancy is confusing and that’s before the date issues pop up.

For instance there is the image called the Immaculate Conception featuring a visibly pregnant Mary standing atop of a snake in his mouth.  Seen in most every local church the Spanish liked this image as it represented, to them, Mary over the Garden of Eden.  To the indigenous, it represented Mary over the highest native deity, the feathered serpent.  To me, this statue represents my Catholic grade school, The Holy Name of Jesus, as her image was to the left of every chalkboard (chalkboard?  That dates me more than going to school with dinosaurs) while St. Joseph was on the right.

The indigenous like to dress this statue (and still do in more rural communities in Michocan) in local frocks to make the Mary image more relatable.  This is what happened to the Virgin of St. John of Lakes (San Juan del Lagos) a small town south of Guadalajara in the 1600s.  This Barbie sized statue of the Immaculate Conception donned indigenous garb, healed a visiting circus performer following a tumble and from that miracle went on to became the most popular pilgrimage site in the Western Hemisphere.

The Virgin of San Juan del Lagos is celebrated February 2nd, the same day we in SMA celebrate Candelaria, the beginning of Spring in honor of Jesus’ first foray into the temple following his birth 40 days earlier.

A way to recall this fact is that the Immaculate Conception is celebrated with flair by the cloistered nuns on December 8th.  Naturally, that makes Mary’s birthday nine months later, September 8th.  Her birthday is celebrated in the chapel on Plaza Civica to Our Lady of Good Health.  The Image of Baby Mary represents Mary’s help with all issues having to do with babies (birth, pregnancy, conception, and alike). 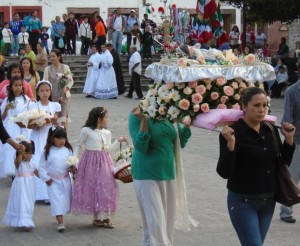 The snag in remembering Baby Mary’s birthday is she shares the date with Virgin of Loreto’s whose home in lovingly recreated in the church next store, the Oratorio.  So on September 8th, the street of Loreto is closed with mechanical rides in honor of the namesake virgin while Baby Mary’s birthday party is next door.

Birthday dates, conception issues, statues in drag and alike can all add to confusion of the local culture of faith.  All I can say is “Welcome to my world!”