As a teen my mother drilled into me the concept of leaving notes when I left the home.  Not that she was all that interested in my shenanigans, but it seemed like a good idea to leave missives on the kitchen table like “Mom, I’ve run away.  I’ll come back when I feel loved, or get hungry, whichever comes first.”

When I had teens I found odd the bible story about adolescent Jesus that disappeared for a few days to later be found by Mary in the temple, or as Jesus called it “my father’s house.”  (In my mind he says it with a tone.)  Somehow I think Mary’s corresponding tirade along the lines of “Is your father’s house run by morons that can’t leave a note?  I had a virgin birth in a manager for this lack of respect?  And don’t get me started on those 3 strangers that came by with myrrh, what new mother wants myrrh?” was left out of the story.

But having teens around the house has never been easy.  Take St. Monica, for example, whose only son was, in today’s parlance, a boozy man-whore.  Later he became more productive as a theologian whose writings from the late 300s continue to be widely read today and profoundly influenced the medieval worldview.  Plus he became Saint Augustine.  Today Saint Monica is the patron of mothers with troublesome children, while one of the greatest minds of early history is patron of brewers. 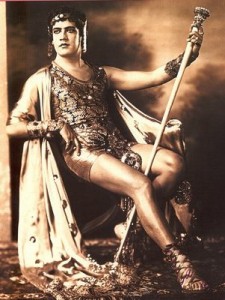 Here in SMA, St. Monica was named for a 17th century hacienda on the outskirts of today’s Parque Juarez.  By the 1930’s it was in shambles when Mexican Hollywood star and perennial bachelor, Jose Mojica, bought and restored it for his mother.  Here he entertained film royalty for his mother like John Wayne, Maria Felix, John Ford, Gary Cooper and Dolores Del Rio who planted trees on the hacienda that still have plaques bearing their names.

When Jose’s mother was on her deathbed she made him, now in his 40’s, promise to become a priest, so he did.  He sold the Hacienda Santa Monica (now a hotel and restaurant) and used the money to fund Mexiquito, the orphanage for boys in SMA still run by Dominican nuns.  It is also SMA’s shrine to the Virgin of Guadalupe and hosts a small museum dedicated to Jose’s films and albums.

Jose went on to write a bestseller, I Sinner, that became a 1950’s film before living the rest of life serving the poor in South America.

So whether you are a helicopter parent along the lines of St. Monica and Mary, or embraced parenting more along the lines of a slow moving ceiling fan, like my mother did, you simply need to have faith.  Faith that your teens will become a Jesus or a St. Augustine or a Jose Mojica, rather than, well, me who still only returns home when I get hungry.