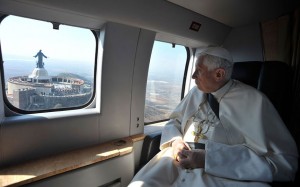 When Pope Benedict flew in and out of Guanajuato’s airport back in 2012 to visit Leon it provided the Pope a glimpse into the conservative heartland of Mexico.  It provided schoolchildren in SMA the opportunity to perform music and dance directly for the earthly representative of God.

Things have changed a lot in four years!  Pope Francis went a new direction visiting some of the country’s most troubled areas on his first trip as pontiff.  Instead of Leon, Francis went to Morelia, the capital of the neighboring state of Michoacán, unfortunately known for both a rich indigenous culture and a culture of present day drug problems. 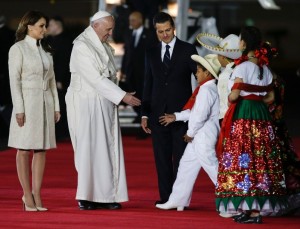 Speaking of indigenous culture, Francis then hopped down to Mexico’s poorest state, Chiapas, before heading to the other (northern) border to visit Ciudad Juarez.  In Juarez he addressed the tide of illegal immigration into the United States, met relatives of victims of violence, and visited a prison.

Pope Francis’ criticism of US Immigration policies and supportive attitude to indigenous activism were warmly welcomed.  His views are a turnaround from his conservative predecessors, St. John Paul II and retired Pope Benedict XVI. 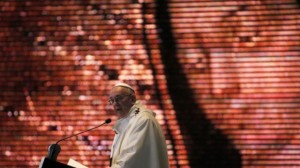 its meaning, St. John Paul was at ease with cultural diversity in worship. On the Polish pope’s last trip to Mexico, in 2002, Zapotec Indians from Oaxaca danced at the canonization ceremony of St. Juan Diego, now patron saint of Mexicans.  Meanwhile a shaman burned herbs to protect the pope from evil spirits.

Both previous popes were afraid of any political activism that could lead to melding Catholicism with leftist ideals.  A fear seemingly not shared with Francis who spent his visit with the disenfranchised, youth and

indigenous pushing Mexico’s Catholicism into the international spotlight not seen since Jack and Jackie Kennedy unexpectedly visited the Basilica of Guadalupe shortly before his death.

Now if we could only convince one of these nearby Popes to stop in SMA if only for chocolates and churros to sweeten their visits while listening to some more adult oriented music and dancing!