Purgatory, Right Around the Corner 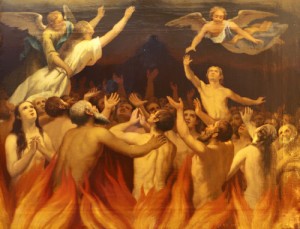 Purgatory has always been an odd thing to me.  Even as a child I couldn’t understand why my physical discomfort aided a dead person’s ascent into heaven from what could be best be described as God’s waiting room.  Then by the time I reached Bishop McDevitt High School, purgatory, like St. Christopher and Limbo, appeared to vanish.

Well, not so much here.  When I started to volunteer teach dance in Escobedo I was surprised to learn a neighboring town with Chichimeca roots is called “The Corner of Purgatory”.  Oddly, I never thought of God’s waiting room as being square shaped or having actual corners.  Plus who picks that name for an actual town?  Also, unless you are currently in Heaven, who wants to admit they are from Purgatory?

Then while on a tour of the churches of Comonfort (The town between Escobedo and SMA) I learned I could walk a pilgrimage from Comonfort to The Corner of Purgatory.  My dancing students egged me on insisting it was just a day walk and lacked the commitment to sleeping outside the nine day walk in January to San Juan de Lagos entails to visit the Virgin there.

However, my mother’s voice rang in my head and I just can’t understand why anyone would intentionally head to Purgatory.  They are probably so very hungry there!