So Many Virgins in SMA

Lately I’ve been on Virgin kick talking about all the different images of Mary seen, and celebrated, almost daily here in SMA.  Yes, of course, I understood the double entree about being SMA’s Virgin Expert, but it wasn’t until I kept getting introduced to various groups around town by sexy voiced women I realized just how dirty it sounded.  Suddenly I went from a conversation about God’s mother to being an implied child molester. 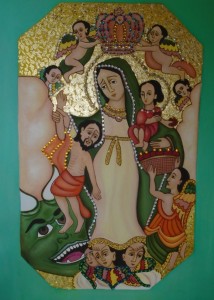 Recognizing SMA’s Virgins is important to enjoying life in SMA as their impact is felt constantly.  From the first appearance of Guadalupe, the mother of all Mexicans, that radically changed how Mexicans view themselves  to the writings of St. Teresa of Avila, SMA’s culture of faith has had distinctly feminine slant.

All these Mary’s are the same person, Jesus’ Mom, Joseph’s wife, Ana and Joaquin’s daughter so as many of the more astute folks at my tours and workshops query, “Why are there so many images?”  Not just so many, but in all forms…young, old, newborn, toddler, pregnant, wife, mother, daughter, dark skinned, blonde, the list of variations is endless and that’s before you get into her clothing options.

The short answer is because all these versions represent different aspects of Mary.  From a more macro level, they all influence the feminine aspect of faith found in SMA yet absent from our Northern neighbors.  Yes, you can argue the Church was (is?) a male run institution, but you can’t deny faith itself promoted a certain femininity. 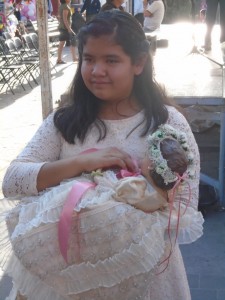 Mary’s birth, introduction to the temple, marriage, motherhood, widowhood, and outliving her only child are all aspects of a women’s life honored and worshiped.  As are the feminine qualities of all encompassing love, compassion and the fiery compassion of a woman’ s need to protect her loved ones.

In local art you can differentiate these images by her age, clinging sea monster, even the lack of limbs play a part in the legend.  What you can’t see in art is the effectiveness of her intervention.  It’s easy to question the logic to certain Virgins but more difficult is to question why churches have standing room only to honor Mary’s aid in baby related issues the 8th of every month.  Several attendees have babies my age, or older, that they still return monthly to thank Mary for her miracle with their baby.

Recently I was gamboling through the cemetery on a tour as, oddly, it is a great place to see many Virgins side by side.  An amicable older gal who felt she couldn’t grasp all the differences in the images exclaimed “I can’t possibly remember this stuff because I’m a nice Jewish girl.”  To which I simply retorted “So was she.”