St. Michael the Archangel is one of Catholic Church’s three archangels (Garbriel and Raphael are the others).  He vanquished Satan from Paradise.  He is also the Angel of Death, weighing souls in his perfectly balanced scales (hence the saint is often depicted holding scales). 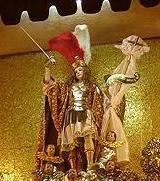 Since archangels are considered to be without gender, the image of St. Michael is often effeminate and portrayed by women in parades.  Saint Michael the Archangel is patron saint for the state of Guanajuato and his feast day is celebrated at various times in towns throughout the state.

In the early morning hours is the Alborada (dawn) which reenacts St. Michael and his troops (at the Parroquia) battling Satan and his minions (across the jardin) with fireworks.  It is a loud and long battle that St. Michael always wins.  It is an event unlike any other festival in San Miguel, both religious and somewhat terrifying to witness.

Surprisingly, the dawn battle of St. Michael in front of his namesake church is not an ancient tradition.  Instead, it started during the height of factory work in San Miguel de Allende (1925-1930) as an opportunity for various groups of factory workers, and other professions (railroad, hairdressers, etc.), to celebrate with music, dance, fireworks and treats for the children while also taking time to say the rosary. 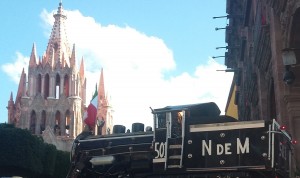 Even today, the early morning procession starts from the old factory, now art galleries, to head towards the jardin.  Plus during the celebrations processions featuring looms and model trains come to the jardin.

That Saturday afternoon, on Calzada de la Estacion, an ancient tradition known as “the encounter” is held.  Dancers representing different tribes of Chichimecas ask for forgiveness for misunderstandings and mistreatments from the other tribes.  Copal incense is offered to the four winds to help forget quarrels and pardon offenses.  Once forgiven the procession towards the Parroquia starts with the dancers and xuchiles.

The word xuchil comes from the Nahuatl, meaning flower.  They are large, complex offerings made of marigolds and cactus leaves originally used by the Chichimecas for burials.    They are placed in front of the Parroquia on what was once the burial ground for their ancestors.

Every xuchil has its own escort of dancers of every age organized in a military hierarchy with a General, Captains, Ensigns and dancers.  Some dancers have made religious vows to make the pilgrimage and have taught the dances.

Each group of dancers is led by two elders, father and mother, representing the ancient Aztec gods Cipactonal and Oxomoco who taught mankind complex rites.  Behind the older couple are dancers cracking whips representing the devil.

Stone crosses are carried to represent the entrance of the souls of Chichimecas killed during the Conquest.

The giant puppets, Mojigangas, also are featured.  The mojigangas are grotesque, papier-mâché giants originally portraying royalty and saints to help with Chichimeca conversions.  Later they became parodies of the wealthy Spanish in San Miguel.  Today they are often featured at weddings. 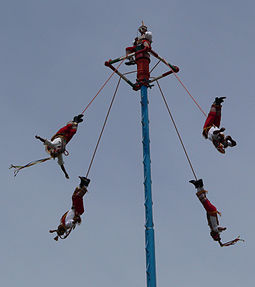 Amongst all these parades and indigenous dancing, the famous Voladores de Papantla, set up their pole in front of the jardin and perform their gut-wrenching feat several times throughout the weekend. This involves five men climbing to the top of the pole. Four of them attach themselves to ropes while the fifth stands on a tiny platform at the very top and plays a flute. The other four fall off the top and slowly spin on the ends of their ropes 52 times until they reach the ground in this graceful ancient Mesoamerican ceremony.

The statue of St. Michael leaves the Parroquia and strolls around town to visit other churches in the city for eight days after the dawn battle.  The eighth day features grand, even by San Miguel de Allende standards, fireworks and day-long indigenous dance performances.