The Dress Makes the Woman

During the height of her mid 1990’s rom-com fame, Julia Roberts repeated in real life a scene from her then most recent movie where the movie star has dinner with a book store clerk boy friend.  As in the movie, folks recognized her instantly, all but one, who asked detailed questions about her life and still had no idea who Julia Roberts was.

Finally it was the lass’ boyfriend that nudged her stating “Remember Pretty Woman?”  “The movie about the whore in the red dress?” she asked.  “Yes, Julia’s the red dress whore!”  The girlfriend was very embarrassed for not recalling the actress.  Miss Roberts was impressed the woman had such a full life movie stars were not memorable.

SMA has several women with fascinating lives in the realms of politics, revolutions, clergy and alike but two are especially noted for their frocks.  One such gal is the Virgin of Good Health.

World-wide the Virgin of Good Health is an image of Mary that appeared to a lad in India delivering milk.  Normally she is seen in a sari, looking appropriately Indian in skin tone and facial features, but not here.  Her temple off Plaza Civica features a blue eyed blonde Mary in what is best described as a mid-1980’s Emmy nominee dress. 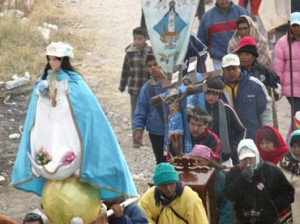 The other well styled clotheshorse is the Virgin of San Juan de Lagos.  Originally a Barbie sized statue of the Immaculate Conception located in a tiny town south of Guadalajara, she was placed in triangular indigenous garb in the 1600’s, performed some notable miracles and is today’s most popular pilgrimage site in the Western Hemisphere.  Her image adorns buses, buildings and jewelry in SMA.