The Flower of Christmas Eve 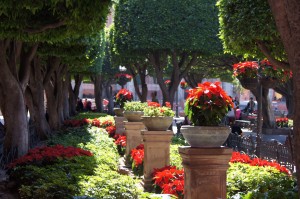 The Aztecs used the poinsettia (what they called Cuetlaxochitl)  to produce reddish purple dye and as medicine to reduce fevers.  Their origins were from a tribe called Chontales that didn’t want to pay taxes to Montezuma causing Montezuma to wage a bloody battle against them near today’s Taxco.  Following the fight, the road was strewn with corpses and bloody footprints.  From this blood bloomed hills of red flowers in the spirit of the victims’ purity and new lives.

This fostered the Aztec belief that dead soldiers came back to earth as butterflies or hummingbirds to feast on the red flower.  Having poinsettias on former battlefields became commonplace. 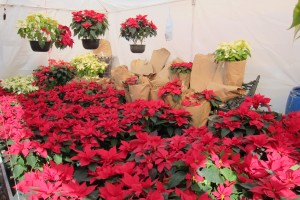 A more modern legend is from the 1500s when Juan and Maria were poor children living in the countryside.  Come Christmas Eve they want to present Baby Jesus with a gift in the church but have no money.  Just then an angel appears instructing them to present some weeds to Baby Jesus.  They are aghast but smart enough to not argue with an angel.

Once in church and said weeds were placed by Baby Jesus they miraculously transform into the poinsettia, or how it is called here, the flower of Christmas Eve (flor de la noche buena).  The little song books used during SMA posadas often feature Juan, Maria and the flower on the cover.

Starting in the 1600’s Franciscan friars in SMA included the plants in their Christmas posadas and celebrations. The star-shaped leaf pattern symbolized the Star of Bethlehem, and the red color represents the blood sacrifice through the crucifixion of Jesus

Having lived in the Carolina Low Country, Charleston was biggest city around and home to the former residence of the first American ambassador to Mexico, Joel Poinsett.  He is remembered for having brought the red flowering plant back to the US in 1825 that became a Christmas time favorite and named for him, poinsettia . 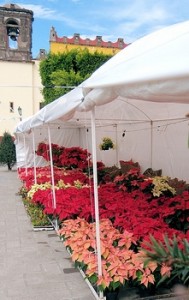 In today’s world, red remains the most popular color, accounting for roughly three-quarters of all sales, followed by white and pink. The more than 100 varieties of poinsettias come in a range of colors from red, salmon, apricot, yellow, cream, and white to unusual speckled or marbled varieties of several colors blended together. New varieties are introduced yearly.