December 8th marks one of the most widely misunderstood concepts of Catholicism.  It is even misunderstood by many practicing Catholics.

The Immaculate Conception is a Holy Day of Obligation, meaning Catholics must attend mass.  Most in San Miguel prefer to attend services at the Temple of the Immaculate Conception on Canal Street affectionately called Las Monjas (the nuns).  In fact, the Sisters of the Immaculate Conception still maintain a small cloister of active nuns that began in the mid 1700s under the direction of then heiress and oldest Canal family daughter that chose to start the order here.  (Next door, it what was once the cloistered convent for the nuns is Bellas Artes where art and culture thrive today.) 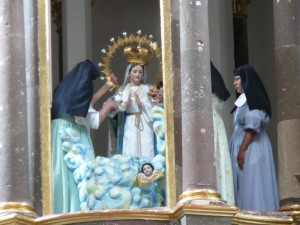 All day there will be food, music, dancing and fun to celebrate this holy day dedicated to Mary’s
conception.

The image of the Mary’s Immaculate Conception in art depicts Mary as young woman standing in clouds surrounded by stars, the moon and cherubs representing the Queen of the Heavens.  Pictured are local nuns getting this image ready for her day-long celebrations.

Since 1846 she is the patron of the United States and one of the early names for the Mississippi River.