“It’s a story of a man named Brady…”  No need to continue on as we all know the story of the first blended family on television.  The theme song itself is rather blurry on who, or what happened to, Carol and Mike’s previous spouses.  At the time the idea of half-siblings and step parents seemed radical but even Jesus had his own tangled family tree.

Actually so little is written in bible about Jesus’ mother and step-dad, or their families, that Mexicans use that as a clear opportunity to fill in the blanks so let’s start with Jesus’ abuelita, Ana.  Before I came to SMA I didn’t realize Mary had parents.  Well, in theory, of course, but not actual names and personalities. 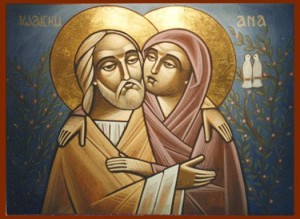 Before settling into a romantic middle aged marriage with Mary’s father, Joaquin, Ana had an active marital past.  Her first husband is believed to be Cleophas with whom she birthed Mary of Cleophas.  (Mary of Cleophas is one of the gals following Jesus around in stature form in SMA during Holy Week.).  Next on the marriage trail came Salome with whom Ana had another girl named Mary, showing a startling lack of creativity on the baby naming front before having Jesus’ mother, Mary, with Joaquin.

Then in an effort to promote the notion the St. Joseph and Mary didn’t have sex, St. Joseph is often portrayed as elderly with two marriages of his own behind him.  This would explain the mention of Jesus’ siblings in the bible.

All these multiple marriages and various children simply reminds me how peeved my own older siblings were because had I been born a girl, we would have had the exact boy-girl-boy-Marcia, Marcia, Marcia – boy-girl sequence the Bradys did!