Vanity thy Name is Faith

Growing up alongside the Amish, I was well versed with the role of vanity in Faith.  The Amish abhor even the aroma of vanity insisting on all external images from clothing, right down to tomb 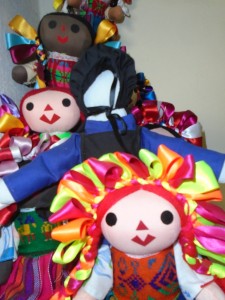 stones, be exactly the same.  No vain photos, or even faces on dolls, for the Amish.  Even a zipper displays a certain “look at me” fashion flair.  Recently I accidentally bought jeans with a button fly that when I discovered it I instantly thought “Crap, I bought Amish pants!”

San Miguel’s culture of faith has its own set of issues with vanity.  Much of the art displayed in San Miguel created during the Inquisition was left unsigned as signing your art was considered extremely vain.

This action makes it difficult, if not impossible, to identify exactly who created the paintings, sculptures and statues still venerated today.  However, common sense can help recognize the works of the same artist, or those that apprenticed under him. 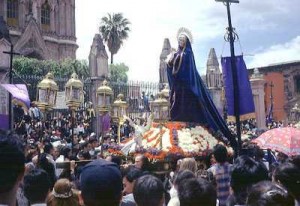 For example, the statues of our Lady of Solitude, an image of sad Mary in purple representing Mary’s between Good Friday, when Jesus died, and Easter when he rises back up from the dead.  The Saturday between Mary was left alone in Jesus’ absence and is what this image of Mary was created to represent.  The statues of Mary in purple found in the Parroquia, Saint John of God and even as far off as Atotonilco all have the look and feel of siblings, if not twins, brought into this world at the same time and place.

Notice the sculptures of fire that appear in St. Francis and Our Lady of Good Health churches, obviously the same hands created both.

This obsession with not signing your artistic creations faded over time namely due to the increased gringo market for local art and insisting on signed works to increase the value of the piece over time.  But who gets to take the credit in art that takes a group to produce?

For example, the alebrijes, multi-colored wooden mythical creatures available in the artists’ market and every craft fair are often a family occupation.  Whittling the wood, a mindless task, is assigned to children while women in the family do broad strokes of painting with the intricate details left to most talented painter of the clan.  However, the art is normally singed by the father of the family who, publicly, will be the best known artist.

Personally, I’ve always signed my letters, books and columns because I like the idea folks knew I wrote it.  Then again, I’m still attracted to the magic of zippers.