Your Neighbors Really Do Matter

Throughout Holy Week you’ll see Jesus crucified alongside two other lads with important cameo roles in the story.  One is Gestas, the bad thief who poked fun at Jesus.  He’s easy to spot in sculptures here as the lad with a scary face.  Legend has it one of the more unattractive Gestases in town was modeled after a local butcher.  Hopefully his meat was better presented!

The other is Dimas.  In English his name is Dismas which sounds, unfortunately, much like dismiss.  In Spanish he is Dimas, which sounds very much like “Tell me more”.  Actually his name comes from the Greek for sunset, or death.

Dimas is the good (or penitent) thief that is nice to Jesus.  In return Jesus promises to see him in Heaven making Dimas the first saint.  Dimas is the only person confirmed, by Christ himself, to be a saint.

In case you are confused which is Dimas and which is Gestas simply look at the foot pad beneath Jesus’ toes.  The side towards Dimas points up (indicating his ascent to Heaven) while Gestas’ side points down for, well, you know.

This guaranteed sainthood opens up a Pandora’s box of philosophical issues.  Namely there is zero indication Dimas was baptized, or even Christian.  So how does an unbaptized lad go straight to Paradise?  Through the power of baptism by intent, or that if he could have, he would have.

Dimas’ baptism by intent is how my Jewish brother-in-law received a Catholic funeral and burial.  Had terminal cancer not unexpected hit the gas pedal hastening his death, he could’ve, would’ve, been baptized.  Thanks to St. Dimas, there is much comfort for the living in the early stages of mourning. 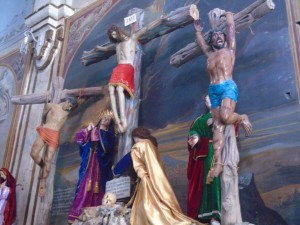 Since Easter’s date changes yearly according to the lunar cycle, St. Dimas’ feast day falls in, or around, Holy Week on March 25th.  St. Dimas is the patron of prisoners (particularly the condemned).   The Tuesday before Holy Week is dedicated to prisoners, remembering when Dimas and Jesus were in prison awaiting Crucifixion.  To celebrate. the clergy from Santa Escuela (the church next to the Parroquia) prepared food especially for the prisoners in San Miguel’s jail.  Then church members, friends and family of the prisoners would bring the image of Jesus behind bars and food to the prison.  Today, due to security, only a priest and one other person are allowed into the prison to visit this day.

St. Dimas’ namesake street in SMA leads uphill to the Chapel of Calvary, named for the hill he, and the other two guys, were crucified on.  When walking through town between his two daughters, my pal often enjoyed commenting  that “Once again here I am stuck between Dimas and Gespas!”