Oddly, the sentiments expressed in the chorus of a late 1980’s pop hit by Belinda Carlisle precisely expresses the circular nature of faith in San Miguel de Allende (SMA).

To Europeans, and later persons from the US and Canada, the concept of life was viewed as linear.  To the indigenous who lived around what is today SMA a linear interpretation of life and faith was unimaginable.  Life, like the seasons of the year, came in predictable patterns.  Birth, like death, was simply part of a continuous repetition.  Important, but no more so than what came before or after because life itself continued on, albeit in a different form that could be invited back on what would become today’s Day of the Dead celebrations. 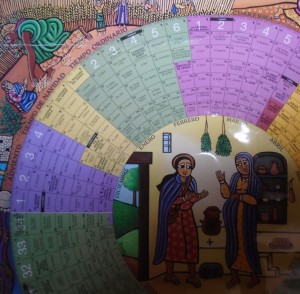 When entering the San Juan de Dios (St. John of God) church there is a poster of a circular calendar on the wall placing 2015 by the seasons of both nature and the liturgical calendar.

As a lad raised in Chocolatetown USA (Hershey, PA) I can find a specific date (Valentine’s Day, for example) on a circular calendar but if I try to locate one week after I get hopelessly lost and somehow end up in November.  My point being, once raised with a linear concept of culture (this happened, then that, then now, and an unknown future) circular thinking is difficult to put into a calendar, much less a spiritual life.

The circular nature of faith and culture is reflected today with the repetitive nature of SMA’s culture.  The new year starts with indigenous dancing for the blessing of earth in January, followed by the celebrations of the seeds, rain, and eventual harvests lined up with corresponding saint days like St. Anthony’s Dia de Locos and St. Anthony the Abbot’s blessing of the animals. Also the circular liturgical events of Mary’s conception, birth, rise into heaven alongside Easter and the Christmas season all reinforce a God, that like nature’s sun and moon, prefers a circular approach to a spiritual life.