When my children were little I read to them The Little House on the Prairie books as they were fascinated by Colonial era customs of the Ingalls.  One holiday season I even tried to recreate with my kids what was Half Pint’s and Blind Mary’s Christmas thrill, maple syrup frozen into various forms in the snow.  Well, I don’t know what chemicals Aunt Jemima puts in her products but I do now know they never freeze no matter how much snow surrounds the syrup.

To more successfully adopt a colonial era Christmas tradition here you’d be better off enjoying one the many pastorelas.  Pastorelas are plays that artistically represent the story of baby Jesus. They take place in the days before Christmas at schools, churches, the mall, the Santa Ana Theater or most any outdoor setting. They were first introduced by the Spanish missionaries in the 1500’s as a means of teaching the faith to the indigenous. 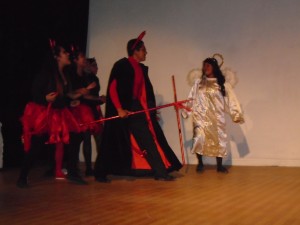 The basic plot of a pastorela consists of several shepherds that are on their way to adore baby Jesus, but are discouraged by Lucifer himself. All of Lucifer’s attempts to stop the shepherds from reaching their destination fail, and they are safely able to deliver their offerings to the Christ child. Over the years the plays have been adapted to modern culture, and are funny, full of song, dance, and creative costumes.

A local high school changes the shepherds into local teen characters that are forced to choose between the guidance of St. Michael (the town’s namesake) and the more appealing devil with his personifications of the deadly sins.  The sins are a comic element and normally are presented with a theme like being all flamboyantly gay middle aged men, or vixenish teen girls.

Often a piñata, another colonial era tradition, is then displayed and burst open for access to the interior sweets.  The seven points on a piñata represent the seven deadly sins and how if we simply beat the sins into submission we, like the characters in a pastorela, are sweetly rewarded for keeping the faith. 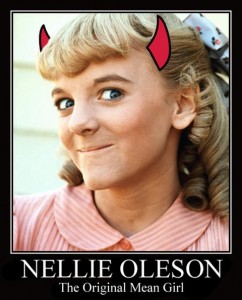 I’m sure an American version of a colonial era pastorela would feature Half-Pint’s nemesis, that nasty Nellie Oleson, as the devil!