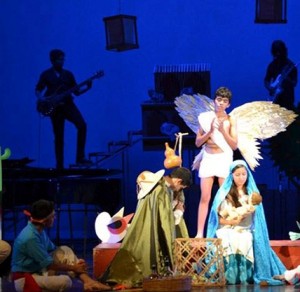 As the holiday season approaches so do the Christmas plays (Pastorelas).  Pastorelas are modern interpretations of Jesus’ birth that started in 1530 and helped convert the Otomis and Chichimecas to the Spanish’s Catholic faith.    The plays originated in today’s Mexico City as an alternative celebration to the Aztec’s celebration for the birth of their sun god (Huitzilopochtli) which occurred over the same days.

Constantly updated the plays change year to year to reflect current popular culture but the basic story remains the same.  A group of folks (normally shepherds, but depending on the anticipated audience it could be modern day teens, a bar-hopping crowd or much else) decide to witness Jesus’ present-day birth.

Upon their journey they are first distracted by the seven deadly sins (greed, sloth, envy, lust, wrath, gluttony and pride).  Normally the sins are comic elements so keep your eyes on Gluttony and Lust as they always want more of everything!  Upon the sins’ failure to distract the travelers out comes the devil only to be deterred by his nemesis, St. Michael.

Michael is an archangel, and though a man, he never lived so he has no boy bits.  For that reason he is displayed in art as oddly feminine with great hair and smooth skin.  In SMA’s processions and plays he is a part for teen aged girls (since, obviously ,they’ve the best hair in town!).

Recently I had a tour with a dozen former 1980’s party girls that were very entertaining.  Later that same evening I ran into them bar hopping around town with the 3 gals that overslept (read hangover) and missed my morning tour.  I asked these sleepy heads what my tour gals talked most about upon returning home and it was St. Mike’s lack of a penis.  Never underestimate the interest in a dick tale!

Upon Satan’s defeat in the Pastorela all the characters gather for a happy song and the start of the Christmas season.  As with all Mexican storytelling it doesn’t matter what languages you speak, faith you are, or form the Pastorela takes (ballet, opera, play) you will understand and enjoy the story!