The Locos have a lot to do in SMA with their merengue tunes and frantic dancing.  Starting in January they help warm the earth for the planting season in February by dancing in front of the Parroquia in honor of the Ecce Homo statue of Jesus (Ecce Homo is when Jesus was a beaten prisoner shortly before death, a relatable image since the indigenous were a conquered people). 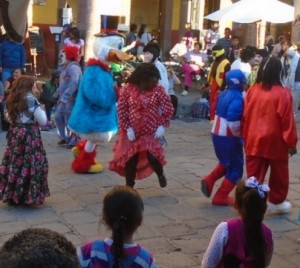 The Locos’ work continues throughout the year at various religious festivals culminating in the biggest tourism day of the year for SMA, St. Anthony’s feast day in June where hundreds of Locos parade about.  Loco costumes range from the expected (clowns, superheroes, cowboys, pirates) to more exotic (men dressed as women, nuns and telenova vixens).  However, one character has always baffled me featuring a man dressed in black face as large woman in polka dots with a handkerchief around her head.

To me, as an American, she is clearly Aunt Jemima, of Pancake fame.  The character of Aunt Jemima started out in minstrel shows following the Civil War as a female counterpart to the Uncle Tom character.  Jemima was an obese Mammy stereotype exemplifying the happy cook on the 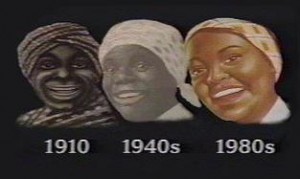 plantation during slavery (Picture Hattie McDaniel’s Mammy in Gone With the Wind).  Before the turn of the 20th century Aunt Jemima was placed on pancake boxes invoking happy morning memories for many 1950’s baby boomers and a collection mania for Aunt Jemima inspired kitchenware.

It was fairly recently Aunt Jemima’s breakfast image put the head scarf down and donned pearls and a more matronly coif to represent a more modern, if still politically incorrect, woman.  She is featured on pancake mix in the Mega and I couldn’t place what made her, as opposed to Uncle Ben (rice) or Mrs. Butterworth (syrup), hop off the grocery shelf and into the local Locos lexicon fifteen years ago.

Then I learned about a popular 1960’s Mexican comic book called Memin that is still published today.  Memim is a dark skinned lad of many adventures that featured his mother who is a doppelganger for Aunt Jemima.  Based on her cartoon antics this comic book version of Aunt Jemima parades and dances around SMA on fairly regular basis alongside Jim Carrey’s “The Mask” and other popular culture mischief makers.