Carol of the Bells

“The bells, the bells!” screeched Quasimodo and many a visitor not accustomed to their nocturnal clanging.  Even in daylight hours their chimes can be deafening, eliminating any attempt at conversation.  Frequently tourists ask me to explain the rationale behind the cacophony of sounds and there is some.  Take the Santa Escuela church alongside the Parroquia, for example. 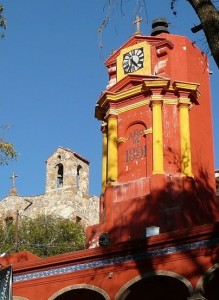 Its original bell tower was moved down to the waterworks area of town called El Chorro and now looms over a Cultural School of the Arts.  Its replacement bell tower has a set pattern to indicate the hour, quarter, half and quarter of for each hour of the day.

Beyond that, it’s a bit of a mystery as to when and why they ring though the intent was to remind residents to come to church.  In fact, a partial reason for the failure of Mexico to ever completely separate church and state was how in countries that did, like Russia, the bells were removed from their towers.  Here in Mexico they were not so while folks talked about separating off the church from politics the bells rang all day to remind you to come to church. 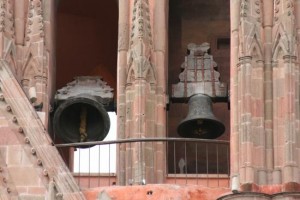 In the Parroquia the oldest of eight bells is La Luz named in honor of Maria de la Luz whose image is in every church in town and has a neighborhood behind the mall named for her.  When La Luz was cast in 1732 noble families donated valuable gold jewelry which was melted together with bell’s bronze in order to heighten and clarify the bell’s sound.  The ringing of La Luz blends with the notes of bells bearing the names of St. Michael (the largest at 6 feet) and St. Peter.  The names of the other bells have been forgotten.

On my first night in SMA I stayed high up in a hotel looking down over the La Ermita chapel on the Real de Queretaro.  My room was at bell-level and come sunrise an obviously drunk, and friendly, man tore off his shirt to better chest bump the bell into ringing.  It was a startling and, against the pink sunrise, pretty introduction to my first full day in SMA.

The lad could have been calling folks to church for a sunrise service but I doubt it.  I’m assuming he was welcoming a new child into the world, or helping to escort out the recently deceased.  Or maybe in his mind it just seemed like a good idea at the time.

Still, by in large, the early morning bells start the pre-dawn celebrations of that day’s saint, virgin or festival.  Personally, I’ve always thought “Carol of the Bells” was the prettiest Christmas carol so I’m still enjoying a little night music to start the day.