The church and convent of the Immaculate Conception was founded by María Josefa Lina de la Canal y Hervás in 1755.  She was the daughter of one of the wealthiest SMA families, the Canal Family. Their town home now houses a bank, right on the town square, and their country estate, a mere 15 minute walk away, became the Instituto Allende.

Maria Josefa’s new order of nuns was different for SMA, and Mexico as a whole.  Normally women joined an order known for a particularly type of work, like education, healthcare or missionary projects.  The cloistered nuns of the Immaculate Conception were not formed with any particular duties, beyond prayer, in mind.

Pretend you were a woman of means then with no particular interest in men, marriage or motherhood.  Work outside the home was virtually non-existent and perhaps you’ve a yen for further studies.  The life of a cloistered nun could be very appealing.  Much like a condo of today, you bought your quarters in the convent and moved in with your slaves or servants to assist you in daily living while you pursued your prayer or intellectual interests.

But then the leadership of the order, or the local bishop, would insist on a more austere lifestyle devoted to poverty, manual labor and physical discomfort all while the nuns were being deprived of their family and friends.   The trend of comfort versus poverty changed frequently over the years with The Church’s desire to regulate all aspects of convent life with oppressive notions of power and gender.   The convent of cloistered nuns strived to maintain their community of women who enjoyed autonomy and solidarity. 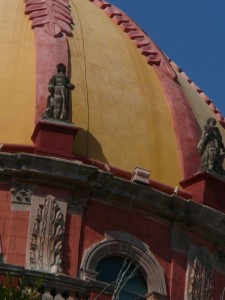 The Temple of the Immaculate Conception is reputed to be one of the main intersections for the underground tunnels that lace the town along with stops at the Oratorio, the Inquisitor’s House and exits leading outside of town.  If you are picturing tunnels like Scooby Do and those meddling teenagers traverse, they are not.  Most are have very limited height, extremely dusty and are used as underground storage areas today.  Even the outside tunnel entrances (once used for secretive escapes out of town) are known as one way streets.  Mainly people enter, encounter a natural gas leak and don’t come back out.

Today the cloistered nuns still thrive with nearly forty members though their living arrangements are decidedly not opulent.  The nuns now live in a back part of the Temple of the Immaculate Conception earning money largely through the sale of tamales, cookies and booze.  For a while the nuns raised white poodles whose descendants still impact our street dog population with curly white fur. 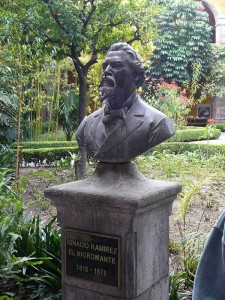 The former convent behind the temple is still a stunning building with a lush garden despite decades of service as military barracks and schools.  Today it is called Belle Artes and features a wide array of classes on the arts.  The center is named in honor Igancio Ramirez, a SMA native and, ironically, one of the most vehement anticlericals of 1800s Reform-era liberals known for his speech “There is no God”.