I’ve always found an odd appeal to funerary art, the art presented in cemeteries.  In the US it met its heights at the turn of the last century when cemeteries were presented on the outskirts of town as bucolic representations of eternal life designed to lure the living with grassy fields and park benches to spend their Sundays on a picnic.  It worked, for a while.

Like communicating in Spanish, funerary art is a language of its own.  Trees, animals and the body language of angels featured on tombs all told their own stories about the featured deceased.

When my children were young in the South these spacious cemeteries were where they sped their tricycles and Big Wheels with abandon as I knew no cars would be by.  Speaking of cars, it is where my mother taught me to drive knowing that with the Hershey cemetery’s mid century aesthetics featuring in-ground tombstones limited  the damage I could possibly do behind the wheel.

San Miguel missed out on the turn of the last century’s apex of funerary art being deep in an economic depression.  The one exception is behind the San Juan de Dios church where the Spanish cemetery for the handful of Spanish locals that could afford even a somewhat extravagant marker.  Until recently the tiny, Addams Family-ish cemetery was in deep decay that it only recently came, somewhat, out of.

That said, it fared better the indigenous cemetery next to it that was plowed over to form DIF in the 1960’s.  DIF is today’s SMA version of a senior center providing chair yoga, meals, glasses and my cumbia classes.

The cemetery behind the Real de Minas hotel, Our Lady of Guadalupe, has some nice artistic elements to it but nothing on par with Guanajuato’s mummies or Merida’s intricate cities of the dead complete with Mayan hut houses and intersecting “streets” littered with skulls and femurs.  Plus I always feel sorry for the gringos in our squared off section of the cemetery who are largely ignored on Day of the Dead as they’ve no ancestors in the city. 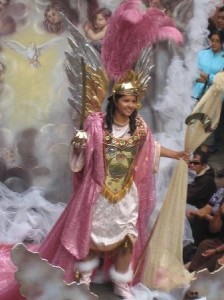 Perhaps they can take comfort from the town’s namesake, San Miguel.  Though an archangel, the first level of angel to appear in human form, he never lived on Earth so he doesn’t have any male genitalia.  (Which explains his good hair, flawless skin, flair for fashion and why he is normally portrayed in processions by teenage girls.)

Lacking a penis, or time on earth, he has no descendents to welcome him back to Earth on Day of the Dead.  With that in mind, the day after Day of the Dead he is featured in local churches to compensate for having no one to invite him back.