San Miguel has had many names from San Miguel de los Chichimecas (for the indigenous that were living here) to the present San Miguel de Allende (for the Revolutionary hometown hero, Ignacio Allende).  Due to their constant presence both in homes and on the streets, San Miguel could have easily and aptly been named San Miguel de los Fuentes (St. Michael of the Fountains).

Though often dry today, the fountains have lost none of their history, legends and charms.  They provided, of course, the water the town was founded around but also locations to provide an opportunity to gossip.  Some of that gossip rippled into international consequences with the notion of gaining freedom from Spain. 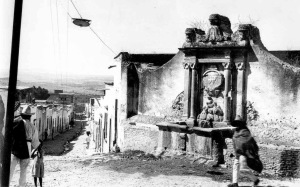 The first fountain was approved by the Viceroy in 1613 in front of the temple of Good Health.  Today’s Plaza Civica was then the town center square and the fountain featured a mermaid.  This first fountain was built by Ignacio Allende’s uncle who headed up the college on the plaza (today a law school).  Sadly, the fountain no longer exists but by 1750 fountains were in all public plazas and the water flowed to the gardens and orchards San Miguel was justly renown for.

Named primarily for their location the early fountains were found at the Plaza de Soledad (today’s Plaza Civica), the Oratorio, San Juan de Dios, jardin de San Francisco plus the streets of Jesus, Correo, and Pueblito.  Fountains were named for a person of honor like Bishop Sollano or General Allende.  Often these baroque niches were named for the ornamentation featured like a mermaid or Neptune, Roman god of fresh water and the sea.

La Pila de General Ignaico Allende fountain was built in 1848 and today is near the steps connecting Canal and Quebrada.    Moved from Pila Seca the fountain is thought to have been designed by the same architect of the Santa Ana and Immaculate Conception churches’ bell towers built at the same time and of similar styles. 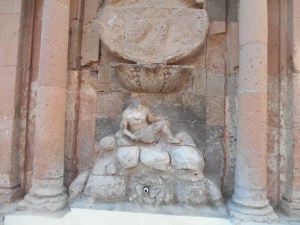 If you lean into the fountain on the corner of Barranca and Hospicio you can see and feel where long ago forearms rested as the bucket was lowered to gather water.  Built in the late 18th century this was a hot spot for local mules to wet their whistles after the long walk into town to sell the goods they carried.  The fountain once featured a mermaid though today only her mutilated head and part of her torso is visible following decades of pranks.

One of the more recent fountains is outside the Parroquia built for the first bishop of Leon from San Miguel in 1932.  Round and dry today it features a column with an image of the bishop standing upon it. 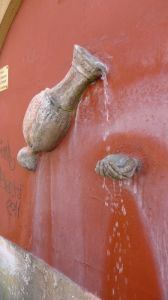 Near Parque Juarez is a rather non-descript fountain called Sudden Hit that is known as the local residence of La llorona (The Crying Woman).  The Crying Woman is an often told tale of a gal named Maria that in effort to keep her lover’s attention drown her two children.  Realizing what she had done, she drowns herself.  While her children reside in heaven, Maria roams the waterways in search for her kids, or ones she can grab to replace them in her watery home.  In any effort to keep local kids out of the park at night, Moms warned of the phantom Crying Woman living in the fountain in constant search for children out after dark.  Once adults, few former San Miguel children will knowingly pass by the fountain at night.

With water now accessible in most homes, and cars replacing mules, the importance of public fountains has waned.  Today there are 47 public fountains with 33 of them working.  It costs 500,000 pesos a year (approximately $25,000 USD) to maintain them with 60% of the cost going to graffiti removal and 40% for fountain care like replacing stolen pumps.