Whether an Olympic Gold or a Purple Heart, there is an inherent value, pride and interest in wearing medals.  Personally I’ve never been in a war, or particularly good at sports, so I can only wear one of the medals so very popular here in SMA.

The most popular medal is known as Saint Catherine Labouré’s  Miraculous Medal.  Catherine was a French nun in the mid 1800’s  who relayed the request from the Virgin Mary to create the Miraculous Medal.  The medal is an exceedingly popular image dedicated to the Immaculate Conception, worn by millions, both Roman Catholics and other denominations, including many in San Miguel. 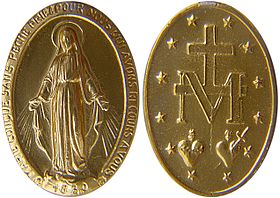 The medal is oval in shape bearing the image of Mary stands atop a snake (Satan) and emits rays from her fingers.  Some fingers have no rays that when questioned  Mary replied they indicate the graces people forget to ask for.  The reverse side features a ‘M” for Mary plus an image of her heart and Jesus’ along with 12 stars (for the apostles) and a cross. 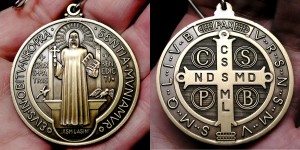 The other popular medal is circle with a plus sign and several letters on one side and a monk on the other.  The monk is St. Benedict who lived shortly after Jesus’ death and  started cloistered living writing the rules that are still followed in the cloistered monastery in today’s Atotonilco.  Benedictine rules focus on a climate of silence divided between prayer and work. The letters around the plus sign are an acronym for his prayer to keep the devil away.

St. Benedict and the Miraculous Medal are only two of numerous medals worn in town, but they are, by far, the most popular.  Physically they aren’t the weight of an Olympic medal, but in terms of local culture and faith nothing carries more intrinsic worth and protection.